A new video on a rare 5-string kantele

A new video played on a rare and an unique 5-string kantele is now published on youtube. This instrument is the only known piece of a 5-string kantele model that was made in series by the kantele master Antero Vornanen in 1930’s.

A few moths ago Vornanen’s relatives visited me, and in addition to this surprising instrument they also showed me some wonderful photos from their private albums. 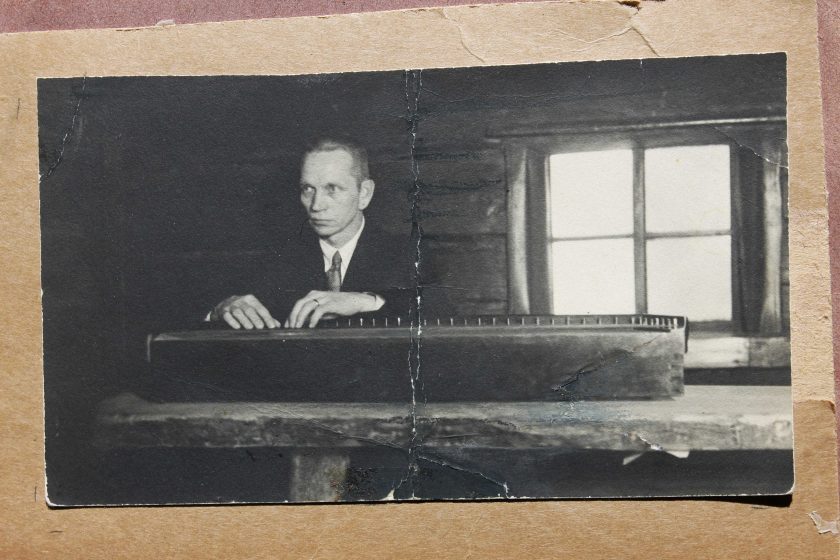 It has been been known that Vornanen made at least two different 5-string kantele models in series, but previously only couple of pieces from one model had been known to survive. One individual is kept at the Sibelius Museum in Turku. This model is hollowed out from below and the bottom is left open.

SM1997_A 5-string kantele made by Antero Vornanen in the Sibelius Museum in Turku, Finland.

This other model that was brought to light by Vornanen’s relatives is hollowed out from above, and the top plate has a heart shaped sound hole.

Page 305 from the KIZAVIRZI-book: Antero Vornanen building 5-string kanteles in his shop with his son.

I was asked to change the rusty strings to new ones, so I decided to make some experiments with different string materials. In addition to steel strings, also bronze and brass strings are tried out on the video.

The difference that is caused by using different pitch can be seen (or heard, actually) clearly, as well. In addition, different fingerings for the old plucking technique is shown on the video.