We all know Elias Lönnrot (1802–1884) as the father of the Kalevala–the Finnish national epic. But what people usually don’t know is that he, among many other things, was also an innovator and a manufacturer of kantele instruments, as well as also a teacher of the kantele.

Here is one example of Lönnrot’s kanteles; SM95 is in the Sibelius-museum in Turku, Finland.

As for the kantele, Lönnrot was a stunning visionary, developer, designer and implementer of new models and a new playing technique. He built, played and taught; developing not only the instrument but also the pedagogy. He also inspired other instrument builders to develop the kantele instrument further. For example, Lönnrot was  an avid visitor at the piano factory of Erik Gustav Granholm as the factory’s own kantele model was under design. (The Granholm’s piano factory operated in Helsinki in 1835–1866).

Heikki Laitinen has estimated that Lönnrot himself may have built around a couple of hundred kanteles, and in addition to that, has asked some others to build according to his designs presumably circa the same amount. According to Laitinen, in Finnish museums there are probably about twenty such instruments that are either built by Lönnrot or by his design.

In addition to making the kantele from several parts (instead of hollowing out from one piece of wood), probably the most striking of Lönnrot’s kantele innovations was to convert it into a chromatic instrument. In the collection of the National museum of Finland there is a 38-string, chromatic Lönnrot’s kantele. Heikki Laitinen writes: “This level of innovation in 1840s in Kajaani makes you feel a chill crawl up your spine, and it is not so easy to understand how this has been possible.” [Kantele Ed. Risto Blomster, 2010, p. 139.]

A 12-string hollow kantele made by Lönnrot in the Home Museum of Runeberg in Porvoo (Photo: Arja Kastinen).

Lönnrot developed the chromatic kantele for the gentry, and he gave instruments and kantele lessons to his gentry friends. For children he developed an idea that the diatonic, from 13- to 15-string kantele should be taken as a part of school education–he wrote about this already in 1847! (The 5-string kantele came to Finnish schools in 1980s.)  For J. L. Runeberg (Finnish national poet) Lönnrot gave his modified model of a traditional 12-string hollow kantele (RGB242). Thus, he was an awe-inspiring kantele manufacturer with several different models and amazing innovations.

The kantele SM95 in Sibelius-museum represents the so called everyman kantele. From this instrument there was  a diatonic model with 17 strings and a chromatic model with 25 strings, and this represents the latter. In 1870s Lönnrot made a guidebook for the everyman kantele–how to build, what kind of strings should be used and how they should be attached, and how to tune. He also made a tunebook for the kantele with 230 songs. Unfortunately neither of these books were published. 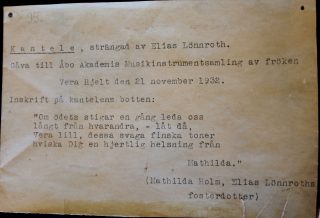 It is possible that the woodwork for the SM95 is done by someone else (by following Lönnrot’s instructions), since the note in the bottom says that the strings are put by Lönnrot. The instrument was donated to the museum in 1932 by Miss Vera Hjelt. On the bottom plate has Lönnrot’s adopted daughter, Mathilda Holm, written lines (in Swedish) that show the meaning of the instrument for her: Om ödets stigar en gång leda oss långt från hvarandra, – låt då, Vera lill, dessa svaga finska tonar hviska Dig en hjertlig helsning från Matilda. [If the paths of the fate should one day lead us far away from each other, let then, little Vera, these faint Finnish tones whisper you a heartfelt greeting from Matilda.]  The Mathilda’s text is rewritten with the donation information on the paper attaced on the bottom plate. 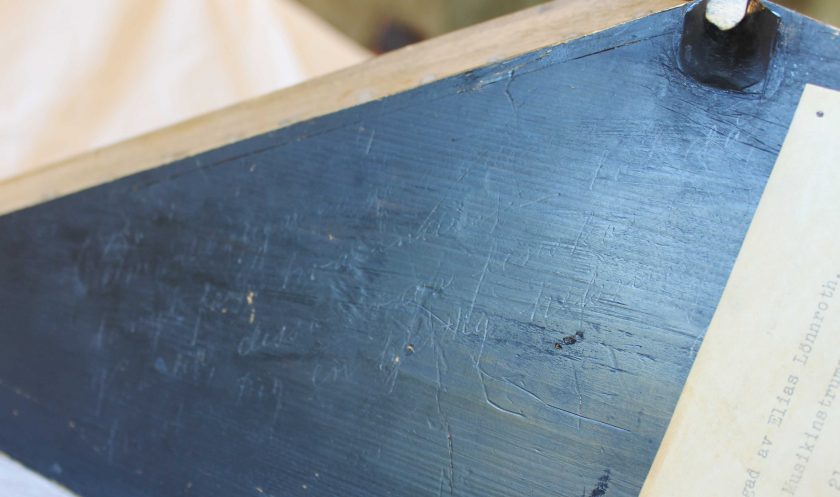 As typical for the Lönnrot’s kanteles, the corners are dovetailed.

There are four carved wooden legs on the corners of the bottom. The brass strings go over a wooden bridge and are fastened on the pins attaced on the end side of the instrument. 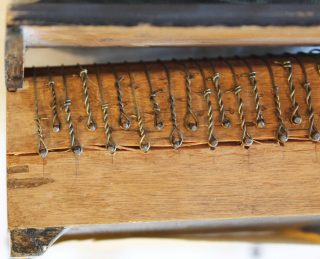 Above the end side there is a separate, black ponsi (a reminder from the hollow kantele) which is shaped like waves from above. Like the ponsi, also the bottom plate is painted black. On the long side the ponsi and the corner of the kantele is broken. 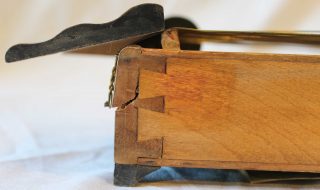 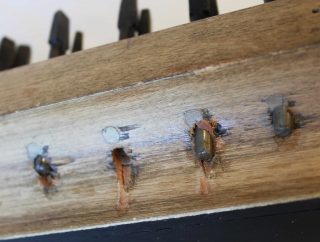 It can be seen from below of the tuning peg side that the places of the pegs have been changed a bit.