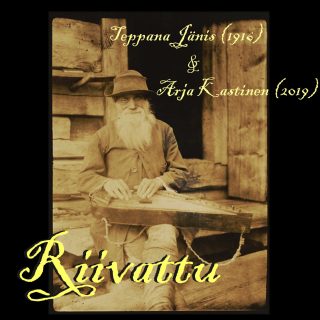 The songs are played by Teppana Jänis in 1917 and 1916 and by Arja Kastinen in 2019. The original copies of the wax cylinder phonograph recordings are from the archive of the Finnish Literature Society (SKS).

[Some people think of [an archive] recording as a boundary that separates. On the other side is “genuine and original”, on the other, something different, something that at least differentiates from the original in some crucial way. However, for a musician-researcher, the recording is a bridge that connects.]

Riivattu single is the first release of the project of which I have been dreaming for over a decade. The goal is to bring the early 20th century kantele phonograph recordings from the archive alive and audible for the 21st century listeners.

Most of the original recordings were made by Armas Otto Väisänen in Border Karelia during the summers of 1916 and 1917. The durations of the wax cylinder recordings vary from ca. 20 second to about two minutes.

In this project I will combine the best of the old recordings with new recordings; it is like reaching back a hundred years and stretching the past towards the present.

In my new recordings, I have also combined the dance tune Tšiitžik together with the Riivattu, since according to Väsänen, this is what Jänis sometimes did, although it is not heard on the phonograph.

In the cover photo Teppana Jänis is playing a kantele with a round end. In my recordings I am using the same kind of kantele replica made by Rauno Nieminen. The original museum instrument was bought in Korpiselkä in 1916 probably by Väisänen. In addition to this instrument, I’m also playing another replica made by Rauno Nieminen on this release. It is a bronze string replica of Iivana Shemeikka’s kantele from 1906.

The problem of the original wax cylinder phonograph recordings was that it was not possible to get the recording device close enough to the kantele, and thus the phonograph wasn’t able to record all sounds–according to Väisänen, some of the highest and some of the lowest tones were sometimes not recorded. In addition, the wax cylinders were worn by each playing, and Väisänen listened to them several times in Helsinki while doing the transcriptions. Also, some of the cylinders were damaged during the storage before the first tape recorder copies were done in 1960’s.

For the second time, the original recordings were copied during the 1980’s by new equipment. In several cases the copies are either too fast or too slow, because the original rotation speed was not known. In these cases I will look for possible information from Väisänen’s field transcriptions; by comparing the metronome reading and the pitch information with the recordings, I will try to reach the correct tempo for each of the songs.

For these new releases, Taito Hoffrén will also clean some noise out of the old recordings with the modern studio software.

In the music I play for these new recordings, I am trying to reach the original esthetics, in which the music breathes, variates and developes in the stream of time. Most of the old tradition karelian kantele players in the beginning of the 20th century were illeterate. They were born inside the ancient, aural runosong culture, and the music they made, lived inside that culture by variating and changing in time with the individual.

In addition to the transciptions, also–and especially–the remaining recordings represent only an insignificantly small part of all the music that was cultivated in this old culture. Because of the short durations and technical problems of the old recordings, we will have to imagine (on the basis of existing data) the lives and the possible continuation of the tunes.

Some extra information can be found from the field transcriptions of Väisänen, and those I will add in the new recordings. I will also add some ideas and improvisations of my own. When that is the case, I am not trying to play like the original musician, but I’m trying to keep up the original tradition, in which each musician played in his/her own way.

On this first single release I am playing several parts, which I have combined with an audio processing software. On the background you can hear one kantele part streched into an effect-like sound. In Ruohtalazen falssi the original recording is also extended by copying and pasting.

During the summers of 1916 and 1917 Väisänen recorded on wax cylinders as many as 13 songs from Teppana Jänis. Many of them belong to the best survived recordings, and thus I am planning to release a whole album of music by Teppana Jänis in the future.