The second collaboration album from Peter Phippen and Arja Kastinen is released on May 19, 2020. The album Forest of a Thousand Songs (TEMPS07) is published digital only. Journalists and album reviewers can also ask for a promotional CD from kantele(at)temps.fi. The album can be found on Spotify, Amazon etc. If you wish to support the artists directly, please download the hight quality 320 kbps mp3 at temps.fi/store.

“I must be honest here, I have now listened to this album 3 times in a row and I’m really having a hard job pulling away from it. Forest of a Thousand Songs by Peter Phippen & Arja Kastinen is probably one of the finest examples of flute and string based ambient music I have heard for absolutely years.”        (Steve Sheppard, One World Music Radio)

“In this album, we feel as if we are part of the forest, part of the whole, and an integral part of a thousand timeless, eternal songs. A thousand accolades for this album.”  (Dyan Garris, New Age CD) 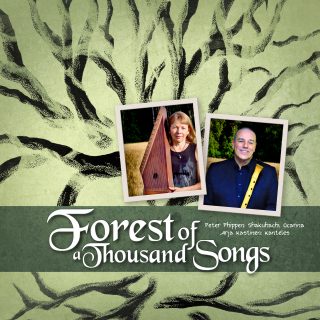 Listen to in Spotify:

The instrumental parts are improvised. Arja recorded her parts in Finland and Peter his in the US. After the parts were recorded Arja edited and mixed the parts along with the background soundscapes. The soundsapes are built from edited kantele and nature sounds, and the sounds of the ringing stone, Klockarsten in the island of Nötö, Finland.

Peter is specialized in traditional flutes from around the world. Over the last three decades Peter has researched the history and performance technique of flutes both ancient and modern. Read more: peterphippen.com. On this album Peter plays the Shakuhachi bamboo-flute and the ocarina.

The ringing stone of the Nötö island (Klockarsten) was recorded in September 2014 when Arja visited the island with her friend Tuula Olkanen. The low and not so very big (ca. 1,6 m2) stone has round, ground cups, and it has been thought to have served as a signal stone for seal hunters and fishermen. It may also have served as a sacrificial stone in the same way as other prehistoric cupstones. Here is one short video footage by Tuula from September 2014: