Kantele of the Runosong Culture and the Dialogue of Creativity

[This page is updated along the project] 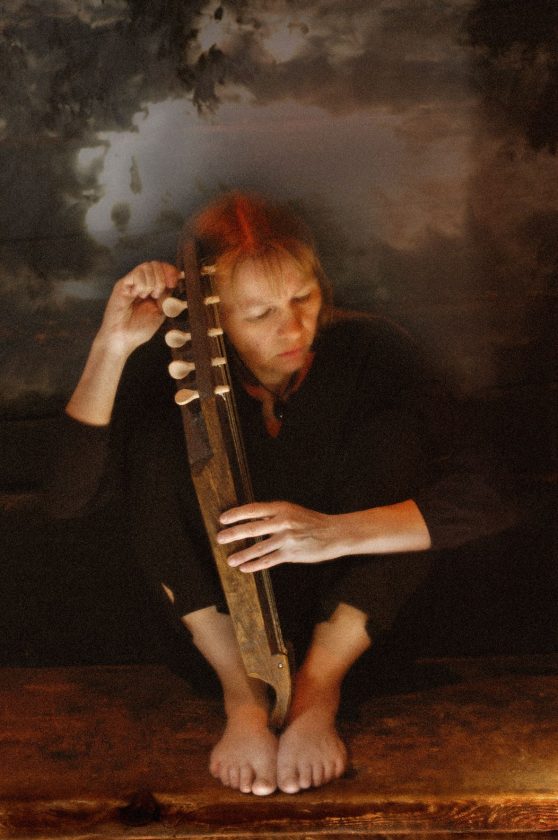 Kantele of the Runosong Culture and the Dialogue of Creativity is Arja Kastinen’s research project as a Visiting Researcher at the Sibelius Academy Folk Music Department, The University of the Arts Helsinki, from September 15, 2021 to July 31, 2023.

The project examines kantele improvisation within the Finnish-Karelian runosong culture, its various manifestations in its original context, and its possibilities and dimensions in modern times. This includes research into instruments, tunes, culture, history and improvisation.

The study of the instruments includes examining the special features of the historical small kanteles: the influence of structure and materials on sound, tuning (pitch), playing technique and through them on music in different individuals of kantele instruments.

Historical Finnish-Karelian small kanteles can be studied in Finnish museums, where there are several hundreds of them. However, you are not allowed to play musical instruments in museums, so the solution for researching sound is to get a copy from the instrument builder. With the help of replicas, musical instruments and the music produced with them can be approached in the means of experimental archaeology.

One of the special features of the topic is the study of resonance by spectral analysis. Both the old plucking technique and the tuning system of the instrument amplify the resonance, which in most kanteles is a very powerful and significant factor in the formation of musical tissue and the associated special sound field. A key question in improvisation is how this sound field and the resonance of free strings in turn affect the musician and the nature of the improvised music.

Resonance is also associated with the way Karelian kantele players of the 19th and early 20th centuries tuned their instruments with the help of the first four partials of the harmonic series and often used modes as the basis for their music. In addition, neutral thirds have been recorded from several players. These details have a significant impact on the music. The equal temperament scale is currently the most common among small kantele players due to its ease of use, but by it we lose something essential to the essence of this old kantele music. 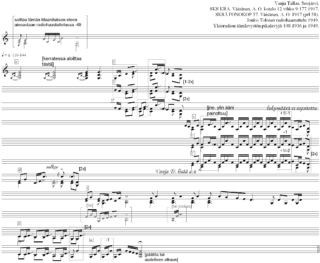 The study of old kantele tunes includes not only the study of runosong melodies, their variations and their adaptation on kanteles, but also the study of kantele tunes recorded at the turn of the 19th and 20th centuries. Although many of the recorded tunes represent a newer layer of music, the way they were played by old musicians is related to the musical aesthetics of the runosong culture and thus opens up perspectives on the past.

Research and analysis of copies of wax cylinder recordings at the beginning of the 20th century in the archives of the Finnish Literary Society, playing along with them and publishing them are currently underway. The first publication, Teppana Jänis, was released on February 28, 2021. At the moment, re-playing and publishing of Iivana Mishukka’s tunes is being carried out. 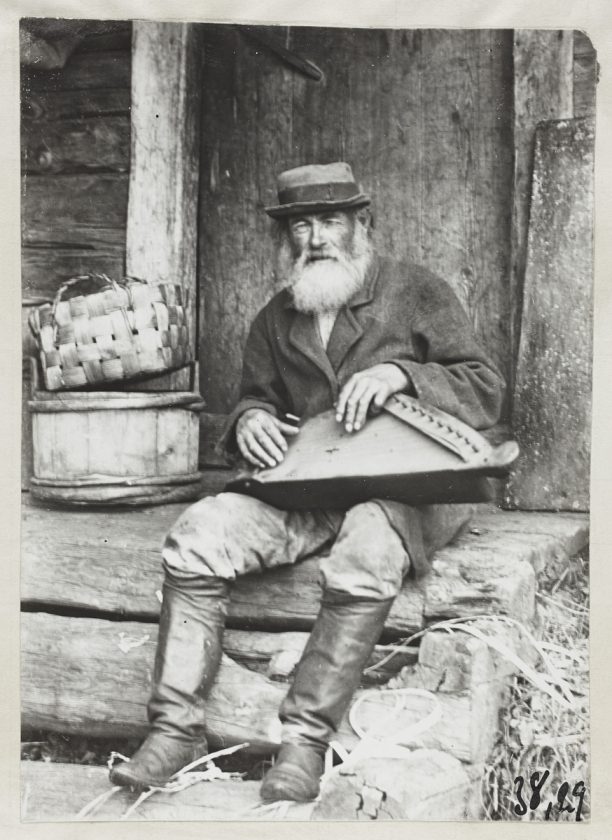 In this context, culture and history research includes combining the small kantele and its use with the world of illiterate people hundreds of years back. What was the significance of the instrument and the music in that culture? How did it manifest itself in everyday life? What was the influence of the people of the surrounding cultures on the transformation of the music? How is this particular way of making music inside the runosong culture positioned from a European perspective? How did this music change over time?

I try to answer these questions e.g. in the form of articles. The article (in Finnish) about Pedri Shemeikka’s heritage for musical culture from the perspective of a researcher-musician is published in the Musiikki-journal 1/2022.

June 8-9 (2022) I will participate in the 19th Century Research Days at the University of Tampere. In my presentation, Peurankaataja Pedrin sielunmaisema, I will depict the 19th century Karelian kantele improvisation through one historical figure, Pedri Shemeikka.

During the History Research Days at the University of Tampere on October 20-22, 2022, I am part of the Social History Working Group on Music and Sound, Sound and Society. In my presentation, Valamon kellot, I examine the significance of the experience of the thunder of Valamo monastery church bells for pilgrims from the Border Karelia and its expression through their most important instrument, the kantele.

Aesthetic Research and the Dialogue of Improvisation

The study of aesthetics has an impact on almost all aspects of this study. The aesthetics of small kantele improvisation in the runosong culture is special and in many respects different from current general music practices. Through that philosophy, I approach the question: how to create favourable conditions for an open and curious mind that allows for creative improvisation?

One of the aims of the project is to develop ways to explore the dialogue that takes place within musical improvisation. 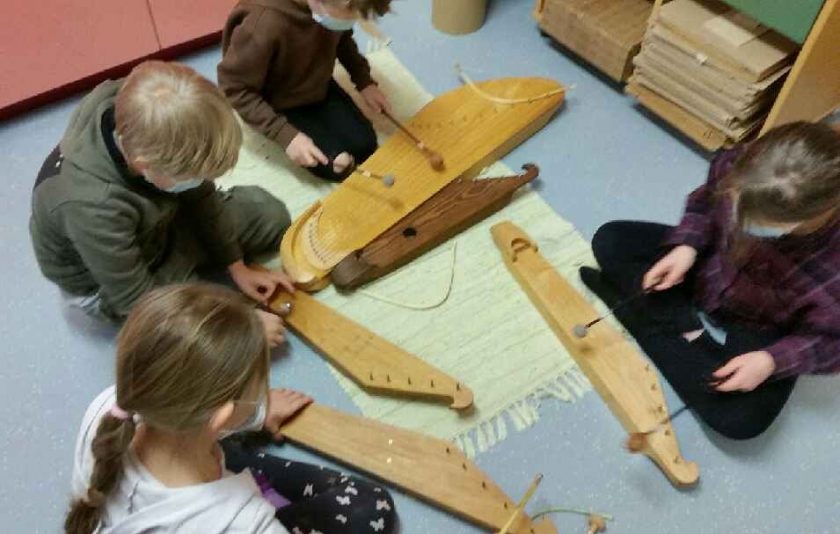 Dialogue can be not only between different individuals but also internal. In line with that aesthetic, dialogue enables democratic and equal interaction. Things are looked at from different perspectives, different options are explored, and new, different and even surprising turns are considered with a curious attitude. The related exercises could be used for a wide range of education.

One of the research tools is workshops. In improvisation workshops for both adults and children, it is possible to explore the different possibilities and deeper meanings of the philosophy of that improvisation as part of creative activity.

Below is my first version of a creative dialogue diagram from the perspective of an improvising musician. It is based on the book Dialogi demokratiassa [ Dialogue in Democracy ] by philosopher Kai Alhanen.

Creative dialogue requires participants to have a common understanding of the key principles and practices that support the development of improvisation in the interaction between participants. The personal reaction of each individual becomes part of the whole, modifying it in its way. The goal is not a pre-agreed outcome, but the improvisation is allowed to proceed freely and participants should be given an equal opportunity to act.

Effective improvisation requires participants to be able to listen and react, that is, to concentrate, to be genuinely present, and strive to understand different ways of performing. Communication is based on trust and mutual respect between group members, which in turn encourages participants to playful experimenting and diminishes the fear of failure.

The outcome of improvisation may be expected and unsurprising, which may lead to the continuation of the same dialogue or to the start of an entirely new improvisation. An unpredictable, surprising result can mean new ideas discovered through improvisation that could not have been imagined in advance. Improvisation can continue from this new perspective, or a new creative dialogue can be initiated inspired by the novel discovery.

The result of improvisation can also be chaos, which at worst leads to the end of the dialogue, the reluctance to continue to cooperate. Another possibility is to start over after the chaos by a joint decision – a new dialogue from the beginning.

The third option presented here to react to the chaos is to persevere in communicating despite the chaos. This is a path that I have often experienced as an almost integral part of the activity. After tenacious communication, order is created into chaos, and with this, an opportunity arises for the expansion of understanding and new insights. Tolerating uncertainty is one of the demands that improvisers have to internalize.

However, the most important thing in improvisation workshops is not the result (which is also often received with gratitude), but the process itself, which, if successful, strengthens the participants’ self-knowledge, empathy capacities, creative thinking, and collaboration skills.

The strongest pillar of the whole project is artistic research under all the research subjects. Not only does it determine my approach to research questions, it also includes the creation of new music. One of the aims is to organize a concert that looks at the improvisation being studied from the point of view of the listener and examines the involvement of the audience in making music and thereby building a dialogue.

I am on a five-year state grant for artists until the end of this year (2022), which enables my work in this research project.